The Sky is Falling in the Quilt Universe

Is this the beginning of the end for Quilting?

If you follow any of the things published lately on social media you certainly might think so. 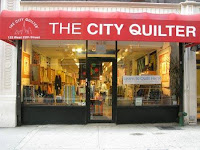 People are talking about the fact that several giants in the industry are closing or streamlining their operations, iconic quilt shops are closing their brick and motor stores (The City Quilter in NYC is but one example) and magazines are shutting down as well. 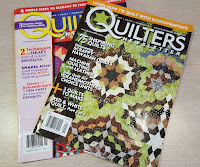 Quilters Newsletter Magazine is without a doubt the longest operating quilt magazine in America and sadly it will cease operations after the October/November issue. The magazine has been published since 1969 and Bonnie Leman the founder, certainly was a pioneer in the industry when she published her very first issue written on a manual typewriter on her kitchen table. For me the news was a huge shock - I have been a loyal subscriber for most of my 40+ years as a quilter.  I liked that it covered all the news; shows and historical quilts and new products like no other magazine out there.  Granted the revolving door of editors and the constantly changing direction had me questioning my renewal the past few years but I could not let it go. It will be missed. 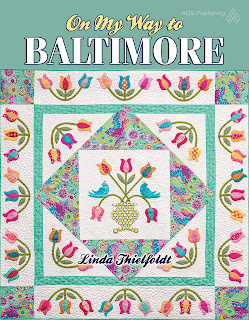 Earlier this year I published my first ever quilt book with AQS!  I was so excited to share my quilts with the public and it's first outing after being published was Paducah and by all accounts sales were good.

Imagine my shock when AQS announced just a few short weeks ago that they were getting out of publishing altogether and going to focus on shows and their magazine. Many authors, myself included are caught in the crossfire and may never see much financial reward for their efforts as AQS tries to sell off every book in their warehouse by whatever means they can as quickly as they can.

Quilt shops all over the country are closing, many owners say they want to retire but if the business was good and sales supported it then why not sell it and the inventory to the next generation of ownership?  So many just go out and very few find new owners which I find telling.  There is a lot of competition from online sellers who have less overhead and don't offer any of the resources or classes that your local quilt shop provides.

So you may be asking yourself "Linda what is the point of your post today?  Well you can bet there is one and it's big!!!

Many quilters are middle age and older - much older in fact. Many have more disposable income and more time as they may be retired or done raising a family than younger quilters.  Some are dedicated quilters who are constantly working on quilts or some aspect of quilting and others used to be but now other life interests or health issues have gotten in the way of being hyper focused on creating quilts.

Another factor is that quilting is not an inexpensive hobby - you can easily spend $300 or more on a bed size quilt just on the fabric.  If you are raising a family buying quilt fabric and supplies may not be in the budget.

Still another factor is that we have more than one generation now that was not taught sewing in school.  No Home Ec classes in many schools across the country means that young people are not exposed to sewing or quilting to the degree that the current largest group of quilters was. For example my grandmother was a quilter, my mother was not but she was an amazing seamstress and taught me to sew garments as a young child. I sewed my first skirt at 9 years of age.


And that ladies and gentlemen brings me to the point of this blog post!!! 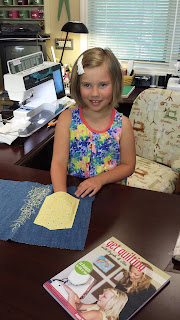 In April of last year I attended MQX East in Manchester NH. They have a cool program where they provide a starter kit of supplies as door prizes specifically with the goal of a seasoned quilter mentoring a young person.  At the banquet on Friday night a table mate won one of the kits and said she didn't know anyone to mentor, she gave it to me. At the same event, my friend Cathy Wiggins won a Janome Gem sewing machine from SewVac Direct and upon learning that I was going to look for a child to mentor, gifted it to me.  I got home from the show and posted on Facebook what had happened and asked if any of my local friends had a child that wanted to learn to sew.  My cycling pal Erik and his wife Susie reached out to me and said their daughter Georgia was very interested and would I be willing to take her on.  Of course I agreed and we met to figure out a calendar.  School got out and Georgia who also goes by G to those that know and love her; started sewing. The first day we made a book bag out of a pair of jeans I had retired and we continued to meet once a week to work on projects. 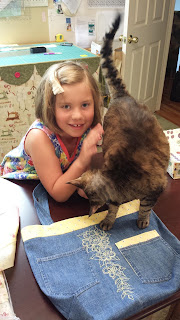 Of course the best part of the day is when the cats come to help out.  Georgia loves cats and we spend almost as much time petting them and playing with them as we do sewing. Here she is with her completed book bag - it has two pockets on the outside and one on the inside and is fully lined.  Not bad for a first project. 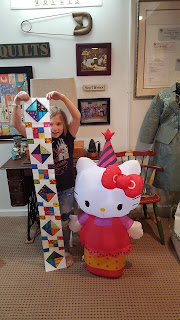 Summer progressed and Georgia got to the point where she could do the pedal by herself - this was a big step. She made a place mat for her mom who loves baseball and we used some of the decorative stitches on my machine that she picked.

She does not use the rotary cutter and the iron only with help and supervision.  But each week her skills improve and she is loving it.

We decided that she was ready to tackle a quilt. Her mom does not sew and would not have the first idea about choosing fabric for a quilt so my vast-will-not-be-used-up-in-my-lifetime-stash came into play.  We went shopping in my stash for the fabrics for the quilt and I will never even miss the fabric and it made it a whole lot easier for G to make her first quilt.  Many of you have a similar stash so mentoring a child can be easy on the parents of the child as they won't have to buy a thing and you probably won't miss it either!!!
We have a mascot - Hello Kitty!  Here is G with her first row of blocks sewn together.  She did all the sewing by herself. Each week we worked on the quilt and it started to come together one block at a time. Georgia was excited with each step of the way and especially as it grew. 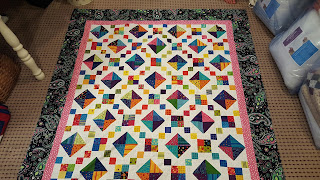 She told me just a week ago as we were sewing blocks together for her first quilt that she did not like quilting.  I said "well I think it's a little late to be telling me this."  She replied "I don't like quilting, I love it!" and that is the reason for this blog post. 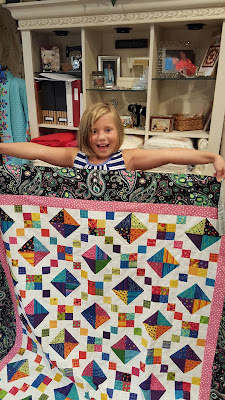 And here she is with the very first quilt she ever made.  She named it Colorful Confetti and we have entered it into the MQX Springfield show in the Kids category.  Next up we have to quilt it.


The bottom line of this conversation is this:

We as seasoned, dedicated quilters have to mentor our youth. We have to help them fall in love with quilting and sewing as we have or yes indeed this quilt industry will die out and the sky will fall. We dedicated quilters are getting older and many make fewer and fewer quilts every year.

We have to discover ways to involve them in projects they can use and that will spark their interest.  Georgia made a book bag, a dress (you know those pre-shirred ones where you sew one seam and add straps), and a place mat all before we even talked about making a quilt.  They were easy projects completed in one day.  She is excited about sewing and wants to try everything.  My big quilting machine is a bit intimidating to her right now but if I know anything about G she will tackle that with gusto as soon as she learns how to use it.


We have the power to interest kids in one of the greatest hobbies and vocations out there.  It teaches them math and perseverance and lets them be creative and is just down right fun to have something you made with your own hands.  Is it easy being the mentor? No.  While G is a delight, she is only 8 and often loses focus, she often gets off track and forgets what she is doing and quite honestly is just a typical 8 year old girl who some days would rather pet my cats.

Could I do something creative for myself every Monday afternoon? Yes.  Could I spend time on one of my projects versus coming up with something she can do in one session that I think would be fun for her - yes.  But in my opinion that is not what life is supposed to be all about.  We quilters have been given a gift and many of us have had a lot of success and made money from that gift.  For me the gift would be wasted if I kept it to myself.  So for me the verse in Luke is being applied every Monday afternoon as I mentor Georgia and fall a little more in love with this bright little girl that loves to sew and wants to make everything...."To whom much is given, much is required."


So my friends, save a quilt shop or a book publisher or a magazine of the future by mentoring a child today!  I can tell you first hand - it will be worth it!

Posted by Linda Thielfoldt at 9:33 PM

Email ThisBlogThis!Share to TwitterShare to FacebookShare to Pinterest
Labels: Mentoring, MQX, On My Way to Baltimore